MATCHIING FUNDS NOTICE: There's under 48 hours to go for fundraising for the Walk for Animals to benefit the Animal Humane Society. This is a really important cause to me, so I've decided to put my money where my mouth is...I will match the next $500 in donations from my own pocketbook.

I'll have to eat ramen for the next month but that's ok...the animals are more important, and I like ramen anyway. :P I'm really excited about doing this!

Please help me turn this $500 into $1000! If you've been on the fence about donating, now is your chance to help save twice as many animals with my matching funds.

Behind cut. Come over and take them off my hands; I want to make room. I
ended up keeping about 10 movies that I watch over and over again, but many
movies are either duplicates of stuff that Seth has, or stuff I can
netflicks if I really want to watch it. $3 each or 4/$10; I'm more
interested in having them gone than I am about money.

If you're going to WAGN or the CVG post-mortem this week, I will be at those
two events and can bring them along.


For those who are familiar with my custom media storage unit, that's also up
for grabs. It is 4ft tall by 8ft wide, has two sliding doors, can store
hundreds -- perhaps 1000+, I never got it all the way full even with my
media whoring ways -- of dvds, video games, and cds, and it was recently
repainted a crisp white, and I added new hardware pulls to the sliding
doors. It can either be used as a room divider as we did in the Tilsner,
against a wall, or behind a couch as we have it now.


If you ever wanted to have ALL of your media out of the way and hidden in an
attractive unit and yet still be accessible, this is for you. I'd keep it
but it can't make the turn into the basement in my new house. I have no
idea how much to charge for it; it was about $150-200 in materials alone,
not counting labor. Make me a reasonable offer and bring a truck and it's
yours -- like I said, I'm more interested in making room than making money.
I will even help you carry it out and load.

Seth posted this on Facebook and I can seriously not get over how adorable and awesome this is. I've watched it about eight times so far tonight.

Most of you know that I'm working at the Animal Humane Society on Sundays now. I love love LOVE it. Animals are in my blood, it seems, and I can't seem to get away from it. I probably never will.

I've been hesitant to join the Humane Society's Walk for Animals because, honestly, I feel like I've hit up my friends for so many various good causes over the years that I'm sometimes hesitant to ask. You guys are great, but I don't want you to hate me. But this is important, and I will never be able to help or raise money for the shelter if I never ask.

So I'm asking. We're 100% supported by donations, and we get 0% help from the government or from taxes. Can you please spare $5, or $10, or even $20 to help a homeless animal? I know times are tough and anything helps, including reposting.

So I just bought a couch and loveseat. Like, a real, grown-up couch and loveseat. I've been camping out on CL for a while waiting for the right ones to come along at the right price. It's a sensible neutral color with wood trim that will be practical and go with just about anything, while still remaining stylish. They're a matching set and only 6 months old, with absolutely nothing wrong with them whatsoever. I got them on Craigslist for a song.

He said he got a lot of inquiries about it and even thought I wasn't the first (I had actually given up hope on it) that he wanted to give me first crack at it because my "I really like the looks of it but I would never buy a couch sight unseen; when can I take a look at it in person?" email made the most sense to him.

It's going to be a strange adjustment for me from the pumpkin orange Hollywood Regency couch that I've sat on for so many years, but it was a long time coming. As awesome as that couch is, it has two broken legs, and because of the broken webbing on the bottom, it sags badly in the middle. It has been rightly pointed out that I love teh old couch not so much for what it is as for what it can be.

For those who have not seen it in person, it looks almost exactly like this:

Except more b0rken, and BRIGHT ORANGE:

Rest assured the old Hollywood Regency couch is not going on the curb. It'll be moved to another room, and eventually get the weekend-long loving restoration it so richly deserves. They just don't make couches like that anymore...I'll bet you anything that 90% of the couches made today will be decommissioned long before 50 years' time.

It has so much character and style and while it may not be right for everyone or even the majority, I love the hell out of that couch so much that I can't bear to see it go into a landfill when I KNOW that all it needs is a weekend and $100 to make it shine.

Every time I see this picture I hear Yakety Sax in my head.

I was heading home from the Sumo party on Saturday night, upset about
something that in retrospect seems a bit trivial, when I got a call frm

mskitty23. A friend and coworker of mine from the e-clinic, Kelley,
had died in a car crash earlier that evening. She had been driving home
from her sister's house after dinner when her car swerved and crashed for no
apparent reason. An ER nurse had been right behind her, and she stopped to
assist, but it was too late. She only had superficial injuries, so the
doctors are suspecting something medical instead of crash-related.

Kelley was the reason I started growing out my hair. A few years back she
got her hair colored and I loved it and was frank in my admiration, but my
hair was way too short to pull it off. On a busy Saturday in December 2007,
I declared right then and there in the Oakdale clinic in front of her that I
was going to grow it out and get it colored just like hers. She laughed and
told me to go for it. I've been growing it out ever since and it's finally
there. Just last week I set an appointment to get it colored, just like
Kelley's.

I wasn't terribly close to Kelley, not as close as a lot of my old coworkers
were. I haven't been there for 18 months now, though anyone who talks with
me knows the clinic is still very much in my heart. But her death has
shaken me, and I miss her. I worked with her for three years. We went out
for beer a few times. I liked working with her. She was sarcastically
hilarious, and was always, always chipper and cheerful. The last time I saw
her was a little over a month ago when I was at the clinic with Dan and
Becky and Shaba...she was the overnight tech who took care of Shaba during
his stay there. I remember that Becky was terribly worried about Shaba and
hated leaving his side, but Kelley helped ease her worries and her heart.

She had a dog named Sudie to whom she was closely bonded. When I realized
last night that Sudie was in the car with her at the time of the crash
(unhurt) and had been at her side even at her death, I lost it all over
again.

I'm 31. I'm supposed to be watching my friends have babies and get married,
not burying them. In the last few years, I've attended more funerals than
weddings, and with the exception of my grandfather they have all been young
and in the flush of life.

Saturday night, it was too awful to wrap my brain around. She was our age,
and in apparent perfect health, and now she's gone, just like that. That
could be you, or me, or someone you love. On Saturday night after I stopped
crying, I drank a beer and watched Family Guy and talked about perspective
and procrastination, and what is ultimately important and ultimately trivial
in our lives. I think she would have liked that.

Wilma is so pretty!

What's the sound of one hand douching? Do you see the guy on the left in the white shirt? I'm pretty sure it sounds exactly like THAT GUY. 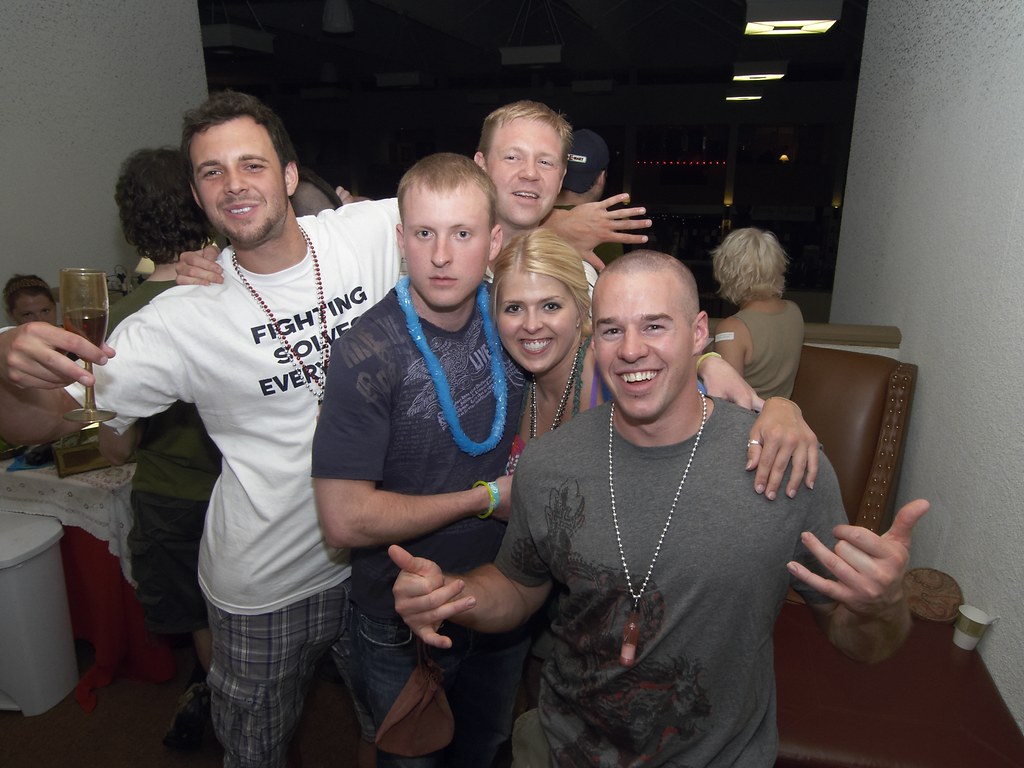 Thanks to some online smrts from

jklumpp, here's a picture of the douchebag who tried to intimidate his way past the two of us and into Consuite on Saturday night at her badging station. The one who tried to physically get me to flinch (who I nearly laughed at). The one who Jenni iscovered, upon calling the bridge, that had attempted to pull this little stunt before that night. The one who apparently harassed party volunteers. The one who probably picked the worst two badgers to try this on.

I am going to plaster this guy's face in flyer form across the hotel in 2010. I am not kidding. (CVG directors: you didn't read that.)

Also, group question: what's a good domain name to use? Sadly, www.thisguyisadouchebag.com is already taken -- I already checked. I would be happy to include pictures of other douchebags who harass our volunteers as well. I can call it a public service!

I had this idea in the car this morning concerning all those "holy crap, I just saw something really amazing/funny/cool" moments at CONvergence. Wouldn't it be cool to get everyone to post them in real time? It'd be awesome to see something cool make its way through the hotel via peoples' reactions, and it'd be great to share it with people outside the con who are interested in such things.

So Cheb created the following Twitter thing, separate from the regular cvg2009 twitter thing, just for this purpose.

Please use/repost/enjoy. The more people we have doing this, the more awesome it'll be.

Now I just have to learn how to use twitter. No, I'm completely serious -- I'm clueless with this. If you can help me figure this stuff out today I'd be grateful.
Collapse